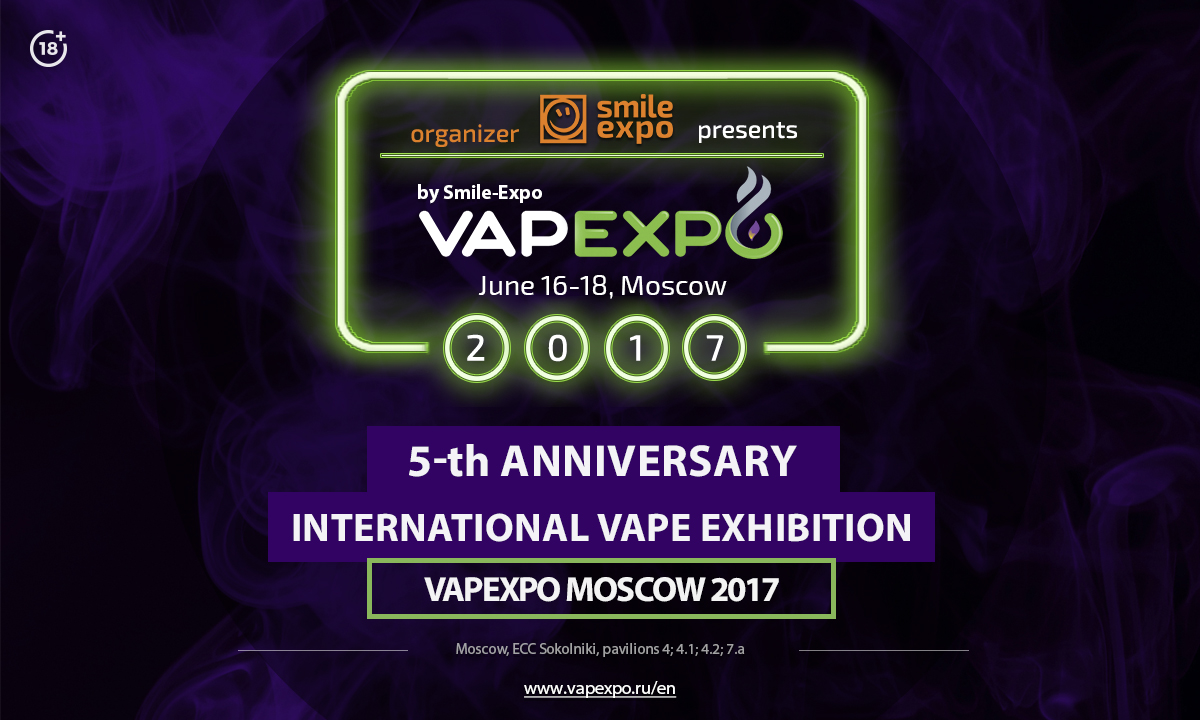 VAPEXPO Moscow 2017 is a global event in the world of Russian vaping, as it brings the national vape market to international arena. Exhibition guests get acquainted with global brands and become familiar with the vape culture of foreign countries.

Besides that, June VAPEXPO Moscow is an anniversary exhibition – the fifth one – and will last for three days instead of the usual two!

These numbers will increase in June. A bigger exhibition area will result in a larger number of exhibitors, primarily foreign ones, for whom the Russian vape market is strategically important.

Industry-based B2B conference will be held under a separate label – Vape Volution. Traditionally, vape businessmen will be able to:

and as a bonus:

Conference will take place in the separate pavilion №7.а of ECC Sokolniki, which will allow listeners to concentrate and take in as much useful information as possible.

Anniversary VAPEXPO Moscow will feature a global cloud chasing tournament – World Series of Vaping, which was held in Miami in October of 2016. The winner will be awarded the title of the world’s best cloud chaser and an impressive cash prize.

The topic of vape contests does not end here. Also, the following contests will take place as part of VAPEXPO Moscow:

In accordance with the best traditions of VAPEXPO Moscow show program, the following activities were prepared for guests:

There are so many prizes at each VAPEXPO Moscow that organizers came up with a separate name for this phenomenon – Vape Shara! Huge numbers of unbelievably cool giveaways will be constantly handed out from the stage. And of course prizes for participation in the contests!

Vape Awards 2017 – ceremony of awarding the best industry representatives. A grandiose party with the upper crust of vape community will soon become a people’s award, as winners are chosen by guests of the event.

And the last thing…

A new activity – Vape Verdict – was prepared for the anniversary VAPEXPO Moscow event! For the first time ever, bloggers of the top-class community Vape Alliance will give a verdict on the product and manufacturer will have a chance to explain its conception.

VAPEXPO Moscow is organized by Smile-Expo company, which has been successfully arranging large-scale B2B and B2C events for 11 years. It has proved remarkably effective in the vaping industry. Thanks to Smile-Expo, vape community has expanded, started to get together more often, and vaping has moved to a new level in Russia. Only VAPEXPO by Smile-Expo is considered to be the most professional vape event thanks to the global scale

Vaping Post is your international vaping news, articles and reviews website. We provide you with the latest breaking news and information straight from the vaping world.

Join thousands of subscribers and get the latest vape news right in your inbox every Friday.